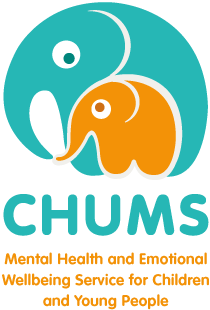 It is hard to believe what has been achieved in CHUMS. It has been a real privilege to develop such a wonderful service that strives to make a difference to the lives of so many children and young people in our community.

CHUMS started in 1997 as two voluntary child bereavement organisations in the north and south of the county. In 1999 the benefits of working together to develop the project was recognised and a merger was implemented in 2000. Shortly afterwards we were successful in securing funding. I was thrilled to accept the post as manager and began in earnest considering ways of developing the service. In the first year CHUMS received 40 bereavement referrals and we had 16 volunteers with myself and a part time administrator.

Very quickly we were receiving 350 referrals per year and had gone from 2 staff to 7 and then 11. We developed creative ways of supporting bereaved children and young people through our programme of individual support and group workshops. We also introduced residential weekends, family days, an on-going monthly drop-in and annual remembrance service. CHUMS also recognised the benefits of supporting parents/carers and this became a key area of support enabling better communication within families.

In 2005 the charity, Friends of CHUMS was launched with the sole purpose of raising additional funding to enhance service delivery. The charity also began to raise money to employ a Consultant Psychologist specialising in trauma to support children and young people who were showing signs and symptoms of post traumatic stress disorder following a death; which might include those bereaved by murder, suicide or another sudden death. The Trauma service was launched in 2008.

CHUMS was supported by the NHS for 12 years but we began to recognise that we could achieve more for the community by being outside of the NHS. In September 2010 we applied through the Department of Health’s ‘Right to Request’ programme to leave the NHS and become a Social Enterprise. This was a long process but we were thrilled to be successful and we became an independent Social Enterprise on June 1st 2011.

Very quickly we were successful in tendering to provide a brand new Emotional Wellbeing Service on behalf of NHS Bedfordshire and this service was launched in October 2011. Since that time we have successfully tendered for clinically based contracts across the country.

Becoming a Social Enterprise has been a real roller coaster of highs and lows as we have embraced the challenges of being an independent company. What has been achieved has been quite remarkable and is due to the enthusiasm, dedication and commitment of an amazing team.

CHUMS now receives in the region of 2,500 referrals per year across its services and has 45+ staff as well as 70+ volunteers supporting a number of services and a rotation of trainees across a number of disciplines
We know that the future is one of many exciting possibilities and we will continue to develop clinically based services for children, young people and their families across Luton and Bedfordshire and beyond.